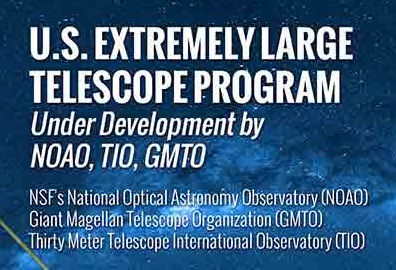 A new research frontier in astronomy and astrophysics will open in the mid-2020s with the advent of ground-based extremely large optical-infrared telescopes (ELTs) with primary mirrors in the 20-m – 40-m range. U.S. scientific leadership in astronomy and astrophysics will be significantly enhanced if the broad U.S. community can take advantage of the power of these new ELTs.

Our shared mission is to strengthen scientific leadership by the U.S. community-at-large through access to extremely large telescopes in the Northern and Southern Hemispheres. This two-hemisphere model will provide the U.S. science community with greater and more diverse research opportunities than can be achieved with a single telescope, and hence more opportunities for leadership.

Our immediate task is advocacy for frontier research programs led by U.S community scientists that can achieve exceptional advancements in humanity’s understanding of the cosmos.

Our audience is the U.S. research community as represented by the upcoming Decadal Survey of Astronomy and Astrophysics (an enterprise of the U.S. National Academies).

As an essential part of that immediate task, we will work with the U.S. research community to develop exemplar Key Science Programs (KSPs) within major research areas including the dark universe, first stars & first galaxies, exoplanet atmospheres, the surfaces of satellites and other small bodies throughout Solar System, and/or other topics to be proposed and prioritized by community-based working groups.

Key Science Programs are envisioned to be open collaborations that gather observers, theorists, and data scientists together to exploit significant investments of Thirty Meter Telescope (TMT) and Giant Magellan Telescope (GMT) observing time, from tens to hundreds of nights. Some of these collaborations are expected to be international in nature. If well-justified by KSP plans, we envisage that at least 25% of the observing time at each international observatory will be available for the U.S. community.

The KSPs chosen for presentation to the Decadal Survey will not be the final programs. Astronomy and astrophysics will continue to evolve rapidly during construction of GMT and TMT, thanks to previous investments in ground– and space-based observatories, such as the NASA Transiting Exoplanet Survey Satellite (TESS), the NASA James Webb Space Telescope (JWST), and the Large Synoptic Survey Telescope (LSST). Actual KSPs will be selected by peer-review before the start of GMT and TMT science operations.

NOAO, TIO, and GMTO are committed to enabling diversity within KSP collaborations. We seek to empower the best minds, no matter their gender, ethnicity, sexual orientation, or institutional affiliation.

More information about the U.S. ELT Program and how community scientists can join KSP development groups will be available after mid-June 2018. 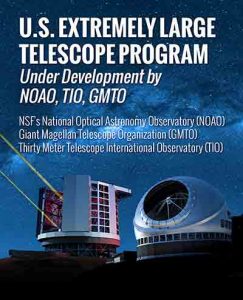